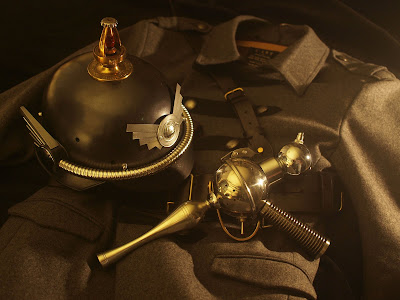 If one is a commander of an Hydrogen-filled airship, one needs to have the confidence inspired by protection from fire and explosion; to this end, I present the fire extinguishing helmet, equipped with a brass water sprinkler that will activate via the breaking of a fluid filled vial, keeping the flames at bay.

Also shown is the non-explosive pistol, a device that allows one to defend oneself without fear of spark or heat causing combustion of explosive gas. This pistol is named "Help the Aged", after the emporium that supplied many of the components.

Not shown are the earthing spurs: boot spurs that have a chain and a weight, allowing the wearer to be earthed to the aluminium deck of the airship at all times, thus minimising the possibility of static sparks.

The uniform includes small extinguishers on a Sam Brown belt, and larger brass extinguisher mounted on a holster on the left hip.

Recommended for timid or cowardly aerial mariners.
Posted by Herr Döktor at 11:41 AM

Also, it was great getting to meet you and see some of your stuff at MCM this year. Doubt you'll remember me with all the people that were amazed at your things.

(I was the guy with Posion Ivy though if it helps ;) )