A STEAMPUNK ART EXHIBITION in LINCOLN 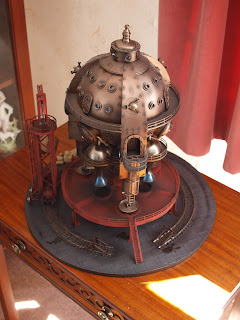 Those nice people at 'The Collection' in Lincoln, are hosting an Exhibition of Steampunk Art in the lead up to the ASYLUM in September:

"A Steampunk exhibition including works from the Victorian Steampunk Society in conjunction with the Asylum Festival.
The Victorian Steampunk Society will be running a Steampunk Art Exhibition through August, building up to the Asylum Festival during September. Steampunk art derives its origins ultimately from science fiction; many people assume that it is a fairly modern culture, believing its existence to begin in 1987, the first time the term 'steampunk' was used. However, steampunk's influence can be seen in writers such as Jules Verne, HG Wells, Mary Shelley and even Bram Stoker who incorporated the style of steam-powered futuristic machinery."

Running from the 17th of August, through the weekend of the ASYLUM, until the 18th of September,a large selection of my work is on show, along with work by several of my contempories.

Do let me know what you think!
Posted by Herr Döktor at 12:00 AM